The paintable Image of the Future figurine has quite a history to it. It started with a human anatomy 3D image which had to be clothed and posed to represent the general idea of the statue described in Daniel 2. Once done, it was 3D printed, a mould was made from the 3D print, and the first cast was made.

Easier said than done, the reality of casting images proved to be much different to the theory. The mould was cast upside down, but pockets of air continued to deform the elbows. Release channels resolved the problem, but caused the resin to drain as well, and it was a long and arduous process of trial and error to get the figurine to an acceptable standard. Only for a new issue to come to the fore…

The 3D printed figurine was not historically correct! Though the Bible do not provide all the intricate details of the statue in terms of style, stance and accessories, it would be preferable to make a figurine that was as close to the style of statues Ancient Babylon was known for. It was basically back to the 3D Drawing board, but this time more committed to the cultural and historical realities of Daniel’s day.

The result was the basic figure of the Image of the Future. The original version of the model had no base and the 3D image was prone to falling over at the slightest bump or breeze. A base was the obvious solution, but had to be relevant to the Bible story as well. 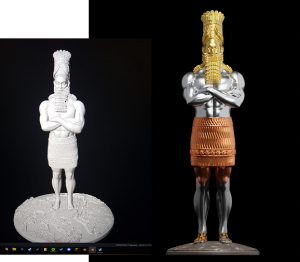 A slice of the globe with the Middle East was taken as the area appropriate to the story and the decision was made to have the statue face Westwards. Why? It is not stated in Scripture that the statue faced in that direction, but the general direction of Bible prophecy in the Daniel-Revelation series tends to move in that direction. Starting in Babylon and later moving to Greece and the Roman Empire, with modern day America also coming into view, it was decided to take the creative freedom to add this detail to the scene.

We now had a figurine, but the purpose of using it as a training tool for children would not be complete without having a paint kit to go with it. Eco-friendly, non-toxic paint had to be sourced and brushes selected to complete the kit, and yet it was not the end. To make sure the message of Daniel 2 is also conveyed, it made sense to add a booklet to the package to tell the story of the rise and fall of empires from Daniel’s time to God’s Eternal Kingdom.

So now we had the figurine, the paint kit and the brushes. The only thing remaining was to consider the packaging. Here we wanted to do something different. Something that would add value and draw attention when the product is displayed. The usual blister packaging would not suit the product and window box just didn’t feel right. The paper core idea popped up and was not only ideally suited to the round base of the figurine, and had enough space left for the paint and brushes set and the booklet, but could also be used afterwards to serve as a container for any number of objects, not to mention that it looked pretty cool as well!

And so the creation of a paintable Image of the Future came to fruition. By no means a perfect idea from the start, on the contrary a concept that worked its way through many trials and errors, it is now product of many hours of work and effort which would hopefully give rise to many hours of fun and careful afterthought as to what the image stands for and what it tells us about a God that knows the future and cares for us very much.